Erasmus:  The enneagram types are numbered one to nine. I’ll briefly summarize what I believe to be some of their characteristics in the Ennegenes (enneagram gene) as well as the standard enneagram model. Now remember, other traditional authors may have a slightly different point of view, because my view is based on what I believe the underlying genetics of the people involved are.

Kinkajou: Ah! The genetics of behaviour.

Erasmus:  In the standard enneagram model Fives are:
Studious thinking. They are regarded as people who value knowledge and who retain knowledge to extend their world. The enneagram five is one of the most difficult of the enneagram types to understand – simply because they are not as distinctly colourful as many of the other enneagram types. If you understand the enneagram one, two, three, four, six, seven, eight, and nine; you can pick up some very distinctive and unique behavioural characteristics for these people. These are colourful and unique types – generally easily recognised. 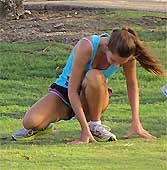 Fives are described as gathering knowledge.

I think in the enneagram genetics model – they can be looked at from two perspectives.

In the genetic theory of enneagrams, “fives” are people who possess both slow and fast noradrenaline genes. (These genes can affect either the brain receptors or brain pathways). This combination gives fives a combination of the low volition / decision index typical of the nine in the enneagrams, but an increased level of driving energy manifesting as heightened emotional awareness and a scattering of focus/energy  so typical of the enneagram seven or the enneagram four.

Some drive and energy, but less driven than a Seven.

Alternatively you can think of the enneagram five as a more thoughtful and less volatile version of the enneagram four. They lack the slow histamine gene, so are not prone to sudden or “on off” decisions. They are as considerate as a nine of things happening around them. (Fours are much more instantly reactive). However they have more energy than is typical of a nine in interacting with their environment. Energy levels in fact more in keeping with those inherent in an enneagram four.

Erasmus: In summary:
They possess a noradrenaline gene which enables  enables rapid thought, but not the gene for the drive for volition (slow histamine gene). They share many traits of the four, but not the drive to action and movement that the slow histamine gene creates. They are not necessarily quick doers. They would probably be best regarded as “careful considerate doers”.

Many traditional enneagram theorists propose that fives are observers: their ego seemingly living in a castle, remote from the hustle and bustle of normal existence. Traditionalists say that fives are very private people who watch the action from the edge of the crowd and would only make a tentative effort to join in. They can be hermits, perhaps leading a reclusive existence. If they are in a position of control they blend into the background and allow others to handle their interface with the world.

Observers and gatherers of knowledge.

Again what bullshit. Fives to some extent, share some of the behaviours of the enneagram nines. Their histamine gene mix is in fact identical to that of the enneagram nines, hence the behavioural similarities. These people are not hiding from life and blending into the background. They are simply not driven by the genes to hustle and bustle in the world to the extent that other enneagram genes drive behaviour. They have  the same sensitivities to emotion as any of the “fast” enneagram types.  In fact, they would often have the same gene mix in terms of adrenergic genes as the enneagram four.  They lack the slow histamine gene that creates black/white low spectrum choices.

Sternheimer: watching and Learning over time.

Become a gatherer of knowledge. WWW.ENKtechs.COM

Erasmus: Fives are not detached asthenic individuals, who refused to partake of normal life. They are human beings with simple basic drives based on the genes they have inherited. The gene mix inherent in being a five is perhaps one of the simpler gene mixes of the enneagram types, but the behaviour is as phenotypically distinctive as any of the traditional enneagram types. It is perhaps however a little bit less colourful and distinctive, blending with behaviours of the related enneagram types.